The next player featured in my new thread “Minor League Days” is Hall of Famer Billy Williams of the Chicago Cubs, “Sweet Swingin’ Billy from Whistler”: 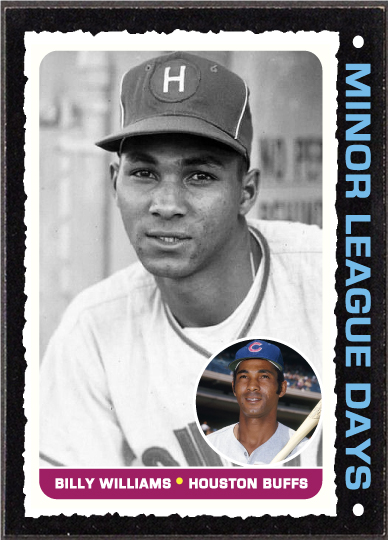 Williams was a 22-year-old when he played the last of his Minor League days, suiting up for the Houston Buffs in 1960 and hitting .323 with 26 homers and 80 runs batted in.
The following season he’d get his full-time break in the Big Leagues and wouldn’t disappoint, hitting 25 homers with 86 ribbies and a .278 batting average that was good enough to take home league Rookie of the Year honors.
Is it possible to be considered overshadowed and underrated yet still make the Hall of Fame? Williams is the perfect example!
By the time he retired, he finished with 2711 hits, 1410 runs scored, 426 home runs, 1475 runs batted in and a .290 batting average over 2488 games.
Along with his Rookie of the Year in 1961, he was a two-time runner-up to the MVP Award (thanks to Johnny Bench each time) in 1970 and 1972 and a six-time All-Star.
What a career he put together, yet always in the shadows of giants like teammate Ernie Banks, Hank Aaron, Willie Mays and Roberto Clemente.
Nevertheless, though it took him six years of eligibility to make it, he was elected for a rightful place in Cooperstown in 1987 when he received 85.7% of the vote.
Just a great player all around.

Posted by Giovanni Balistreri/ WTHBALLS at 7:01:00 AM