Today’s blog post has the newest member of the “Minor League Days” thread, former slugger and American League MVP Boog Powell, who was a 19-year-old prospect while playing for the Rochester Red Wings in 1961: 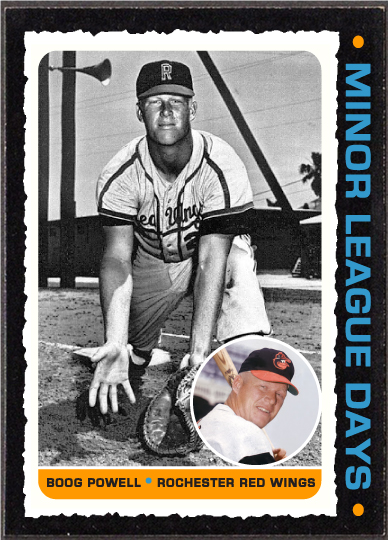 It was a rapid ascent for the future All-Star, breaking into pro ball in 1959 as a 17-year-old and progressing each year until he had his September call-up to the Big Leagues in 1961, but not before tearing up Triple-A ball by hitting 32 homers with 92 runs batted in over 142 games for Rochester, hitting .321.
He would go on to finish his Major League career with 339 home runs, 1187 runs batted in and a .266 average, while being named to four all-star teams, taking home a Most Valuable Player Award in 1970 while with the World Champion Orioles, and two other top-3 MVP finishes in 1966 and 1969, playing for 17 seasons.
Always a fan-favorite in Baltimore, Boog can still be seen around Camden Yards at his "Boog's Barbeque" restaurant.
And who can forget those awesome Miller Lite commercials in the 1980's!? Those were great!