Time to celebrate the game that created the defensive legendary of New York Yankees third baseman Graig Nettles, who put on a clinic in Game 3 of the 1978 World Series to give the Yankees their first win and kill some of the momentum the Dodgers built over the first two games: 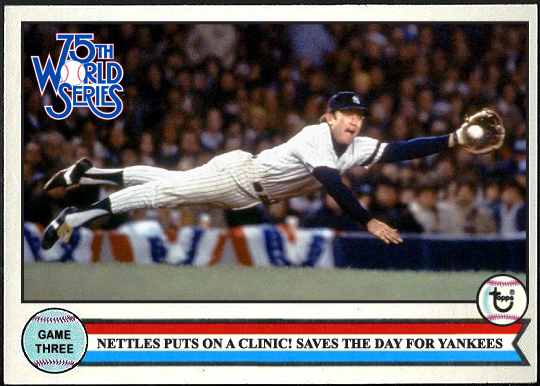 With the Yankees desperate for a win in Game 3, they had their ace Ron Guidry on the mound, but it was their All-Star third baseman Nettles who would be the “stopper” of sorts.
To really get the idea of what went on, here’s a great write-up on the SABR. Org site that recaps the games, thanks to Steven C. Weiner:

“For Game Three, the Yankees had their ace on the mound, Ron Guidry. Guidry had a career year, leading the American League in wins, ERA, winning percentage (.893), and shutouts (9) while completing 16 games in 35 starts.
With the Dodgers countering with Don Sutton (15-11, 3.55 ERA, and 12 complete games), there was every expectation that a stellar pitching performance on either side could determine the outcome of the game. The defensive prowess of Yankees third baseman Graig Nettles was well known, even if underappreciated since he broke in with the Minnesota Twins in 1967. His defensive plays would turn Game Three and the World Series toward the Yankees in dramatic fashion and become the lead highlight of Joseph Wancho’s SABR biography of Nettles.

The Yankees struck first with single runs in the first and second innings for a 2-0 lead. Roy White homered down the right-field line in the first and Bucky Dent’s one-out groundout in the second scored Nettles, who had singled earlier in the inning. The Dodgers got one run back in the third when Bill Russell singled to score Bill North, who had walked, stolen second, and advanced to third on a groundout. It could have been worse had it not been for Nettles’ wizardry. Reggie Smith  hit a rocket down the third-base line. Nettles dived to his right to snag it, hurried to his feet, and threw Smith out at first to end the inning.

Nettles’ best would come in the fifth and sixth innings to bail out Ron Guidry. Guidry was still holding a 2-1 lead without his best stuff. In each of the first six innings, Guidry walked a batter. In the fifth inning, Smith came up again and lined another shot toward Nettles, who was only able to knock it down, holding Smith to a single and loading the bases. Steve Garvey did the same thing, lining a shot to third. This time Nettles backhanded the ball from his knees, spinning in one motion for a throw to second for an inning-ending force out. Davey Lopes came to bat in the sixth inning with the bases loaded and two outs and drilled one in Nettles’ direction. Again, Nettles made the play, throwing to second for a force out to end the inning.

The Yankees got to Don Sutton decisively in the seventh inning with three more hits. An RBI single by Thurman Munson scored Bucky Dent from third and brought in reliever Lance Rautzhan, who yielded another RBI single to Reggie Jackson, scoring White. Lou Piniella’s groundout scored Munson to finish the game’s scoring, 5-1. For Guidry, it had been a struggle not being able to retire the Dodgers in order in any inning. “When I was warming up before the game, I thought I had a good fastball. I must have left it in the bullpen,” he said. But his 137-pitch gutsy performance meant the Dodgers’ World Series lead had been cut in half, two games to one.”

What an instant Major League classic! One of the earlier baseball highlights of my live as a nine-year-old back then.