Love creating cards like this!
Here’s a “not so missing” 1979 card for former Cincinnati Reds third baseman Mike Grace, who played his entire Major League career over the course of two weeks between April and May of 1978: 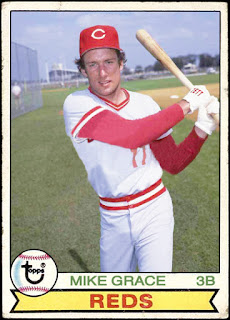 Grace appeared in five games, going 0-for-3 at the plate, thus representing the entire action of his Big League experience.
He would go on to play another five years of Pro Ball through the 1983 season, but would never get the chance to come up to the Majors again.
Nevertheless, the man made it to the top, and that’s more than I can say!
Cheers Mike!
Posted by Giovanni Balistreri/ WTHBALLS at 5:37:00 AM