Let’s go and give a “not so missing” 1978 card to former Chicago Cubs catcher Mike Gordon, who had a brief two-year Major League career in 1977-78: 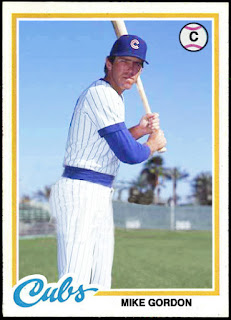 Gordon appeared in the first eight games of his brief MLB career during the 1977 season, collecting one hit over 23 official at-bats.
The following year he’d play in four games, going 1-for-5 at the plate in what turned out to be the last taste of Big League ball.
He’d go on to spend all of 1979 in the Cubs’ Minor League system before retiring for good, having spent his entire eight-year professional career in the Chicago (NL) organization.
All told, he finished his MLB career with a .071 average, with two hits in 28 at-bats with a couple of runs batted in.
Posted by Giovanni Balistreri/ WTHBALLS at 5:42:00 AM