The next no-hitter profiled on the long-running thread is that of young San Francisco Giants pitcher Ed Halicki on August 24th 1975 against the New York Mets: 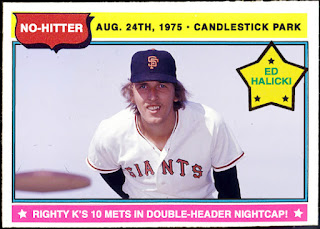 The 24-year-old was in his first full season when he turned in the performance of his career, striking out 10 while walking two, on his way to the no-hitter at home in Candlestick Park.
Gary Thomasson and Willie Montanez drove in two runs each, supplying more than enough offense to give Halicki the support for the win, improving his record to 8-10 and lowering his ERA to 3.48.
Turns out Giants fans would have to wait another 35 years before another of their pitchers threw a no-hitter, when Jonathan Sanchez did just that on July 10th of 2010.
Nevertheless, Halicki, though he did put in a nice seven-year Major League career, reached the pinnacle of his Big League days that day in 1975.
Posted by Giovanni Balistreri/ WTHBALLS at 6:01:00 AM