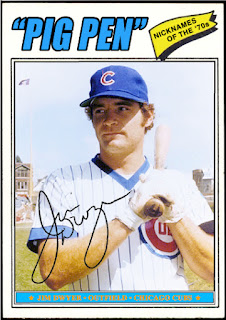 Now, the reason this card is so odd is that Dwyer never actually played a single game with the Chicago Cubs, but he did spend most of the 1977 season in the Minor League system, where he had a great year at the plate.
On top of that, he actually DID see Big League time in 1977, but with the St. Louis Cardinals, for whom he never even played a single Minor League game for that year.
Really unique situation here!
In the Cubs system that year Dwyer hit .332 with 38 doubles, 12 triples and 18 homers to go along with 108 walks, giving him a fantastic .459 on-base-percentage.
You would THINK the Cubs of those days could have tried him out!
Nevertheless, he found himself in St. Louis by year’s end and played in 13 games for the Cardinals, hitting .226 over that short time.
So when I found this image of him at Wrigley, in Cubs gear, I knew it would make an interesting card to add to the collection!
Dwyer would go on to play 18 seasons in the Majors, hitting .260 generally as a guy off the bench for no less that seven teams: Orioles, Cardinals, Twins, Expos, Red Sox, Mets and Giants between 1973 and 1990.
Posted by Giovanni Balistreri/ WTHBALLS at 5:57:00 AM

Email ThisBlogThis!Share to TwitterShare to FacebookShare to Pinterest
Labels: 1977, Cubs, Jim Dwyer, Nicknames of the 70's