Came across this image of the great Lou Brock and had to make a 1976 “special” card with it, celebrating his march towards history with stolen base after stolen base during his Hall of Fame career: 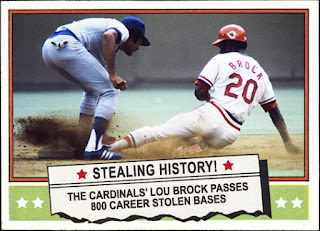 Coming off of his record-breaking 1974 season when he stole 118 bases, the 36 year old then went on to steal another 56 in 1975, pushing him past the 800 mark for his career.
Of course, he would go on to steal another 138 bases before he was done, not only passing Ty Cobb for the “modern” MLB record, but even the great Hall of Famer Billy Hamilton from the 19th Century, who stole 914, unquestionably giving Brock the record until a guy named “Rickey” came along.
I love the extra logo sticker the St. Louis Cardinals used on their batting helmets in the middle of the 1970’s, shown on the image here.
Nice little bonus!
Posted by Giovanni Balistreri/ WTHBALLS at 5:44:00 AM