Although I created a “Highlights from the 1970’s” card for the Oakland A’s four-pitcher combined no-hitter some five years ago here on the blog, I had to include it in my long-running “no-hitters through the 1970’s” series: 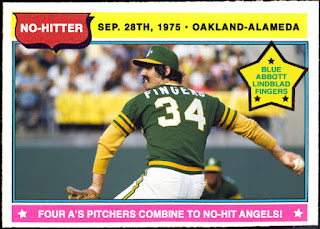 Whereas I originally created a card showing all four pitchers who contributed to the gem spun on the last day of the 1975 season, today I wanted something different, so I pictured the guy who closed out the game, Hall of Fame reliever Rollie Fingers.
Since I already wrote about it in the original post, I’ll take the liberty to copy-paste it here:

On the very last day of the season the A's closed out yet another successful year, no-hitting California and winning 5-0, giving them 98 wins for the season and their fifth straight division championship.
Vida Blue, Glenn Abbott, Paul Lindblad and Rollie Fingers each contributed to the no-hitter, with Blue giving up the only two walks.
What I also find incredible is the fact that the A's switched catchers during the game as well!
Gene Tenace started the game behind the plate, then switched over to first base while Ray Fosse came in at the top of the seventh inning to catch Lindblad.
For the life of me I can't (off the top of my head) remember another no-hitter where the starting catcher was pulled.
Anyone know another such game?
I'll have to look it up for sure!
As a kid I always remember the two combined no-hitters of the '70's: this game and the one that happened the very next year with two Chicago White Sox pitchers doing the same.
I'll be designing a card for THAT game as well in the near future, so keep an eye out for it.
For anyone interested in the Oakland no-hit game particulars, here's a link to the box score on the Godly web-site, "Baseball-Reference.com":
http://www.baseball-reference.com/boxes/OAK/OAK197509280.shtml

Another item to point out: Reggie Jackson hit two home runs in the game, the second of which gave him a tie for the home run crown in 1975 with Milwaukee Brewer George Scott, one of THREE such occasions that Reggie would share a home run crown in his career with a Milwaukee Brewer!
And all three times while he was playing for a different team!
How freakin' strange is that?
He's also share the crown in 1980 with Ben Oglivie while playing for the Yankees, and with Gorman Thomas in 1982 while with the Angels.
Man I love this game!
Posted by Giovanni Balistreri/ WTHBALLS at 5:49:00 AM