On the blog today we have a “not so missing” 1976 card for a guy I already produced 1977 and 1978 cards for, former Boston Red Sox pitcher Rick Krueger, who got dissed by Topps on more than one occasion: 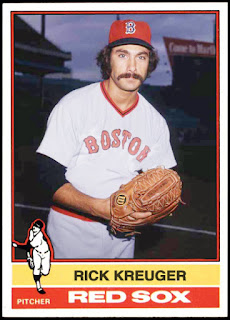 Krueger appeared in just two games for the Red Sox during their 1975 American League Pennant run, pitching to a 4.50 earned run average over four innings, not factoring in a decision.
1976 would be his best season as a Big Leaguer, going 2-1 over eight appearances, four of those starts, with a 4.06 ERA in 31 innings pitched, even tossing a complete game, though he did walk 12 batters while striking out 12.
After his one appearance 1977 season, he’d be back in 1978, making six appearances for the Cleveland Indians while pitching to a 3.86 ERA over 9.1 innings, not factoring in a decision.
Turns out, that would be it for his Major League career, finishing up with a record of 2-2 with a 4.47 ERA over 17 appearances and 44.1 innings pitched, with 20 strikeouts against 20 walks in parts of four seasons.
Just interesting that he never even made an appearance on a multi-player rookie card anywhere along the way.
Posted by Giovanni Balistreri/ WTHBALLS at 5:50:00 AM