Time to go and give former slugger Ben Oglivie a 1972 “dedicated rookie” to add to my long-running thread, as he originally shared a spot on a late series three-player rookie card in the now classic Topps offering: 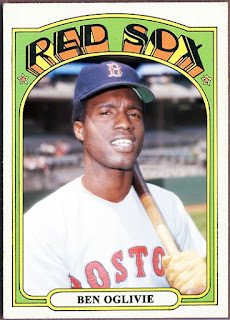 Oglivie appeared in the first 14 games of his career during the 1971 season for the Boston Red Sox, hitting an admirable .263 with 10 hits in 38 at-bats, scoring two while driving in four.
He didn’t hit a homer in that short time-frame, but those would come in bunches over the next 16 seasons, including a league-leading 41 in 1980 as part of the powerful Milwaukee Brewers team that also featured guys like Cecil Cooper, Robin Yount, Ted Simmons and Paul Molitor.
He would get traded to the Detroit Tigers in the 1973 off-season for Dick McAuliffe, where he would continue to be played as a platoon-player over the next four seasons, averaging about 100 games a year, but nevertheless playing well as he showed power and a decent batting average hovering around .280.
However it wasn’t until he was traded to the Milwaukee Brewers for pitcher Jim Slaton that he’d finally find full-time work, eventually becoming a legitimate slugger who’d lead the American League in 1980 with 41 homers as I mentioned earlier, along with a career-high 118 runs batted in and 94 runs scored.
He would play with the Brewers through the rest of his 16-year career, until 1986, before going on to play in Japan for two seasons with Kintetsu, where he’d his 46 homers combined.
Overall in his MLB career, Oglivie batted .273 with 235 homers and 901 RBI’s, with 1615 hits over 5913 at-bats and 1754 games, getting three All-Star nods and a Silver Slugger for his Home Run champion 1980 season.

Posted by Giovanni Balistreri/ WTHBALLS at 5:33:00 AM