Morning everyone!
Up on the blog today will the first of two different “dedicated rookies” for that 70’s icon Oscar Gamble, this one being the Philadelphia Phillies version, for which Topps had him depicted as in their 1970 set: 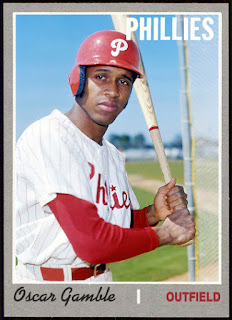 Great “card” to add to the collection!
In about a week I’ll also have my Chicago Cubs version, which is who Gamble made his major league debut with in 1969, so keep an eye out for it!
Gamble played in 24 games in 1969, again for the Cubs, hitting .225 with a homer and five RBIs over 81 plate appearances and 71 official at-bats.
On November 17th of 1969 he’d be traded along with pitcher Dick Selma to the Phillies for Johnny Callison and a player to be named later, which ended up being Larry Colton.
You know, I never realized that during his entire career, Gamble only had ONE season where he topped 500 plate appearances, and that was in 1974 while playing for the Indians (he had 508).
In 4502 career at-bats, Gamble hit 200 homers. Not bad when you think about a full career would be around 8000 at-bats. We’re talking 400+ homers from him.
I'll always remember Gamble as a Yankee at the tail-end of his career. He always seemed to hit a homer when he came up, and was always a fun guy to watch play. A true character.
Always aware of his numbers, he'd frequently talk about his "home run ratio", and years later Jim Kaat, while broadcasting games on the YES channel, would always bring that up when some current player was hitting home runs at nice pace.
Nevertheless, Gamble played 17 seasons in the Big Leagues, with those 200 home runs, 666 RBIs and 656 runs scored over 1584 games between 1969 and 1985.
I miss that man!
R.I.P. Sir...
Posted by Giovanni Balistreri/ WTHBALLS at 6:36:00 AM