On the blog today is a career-capping “not so missing” 1973 card for former Detroit Tigers pitcher Les Cain, who saw the last of his Big League action in 1972: 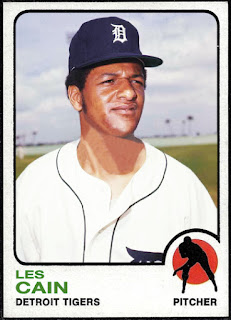 Cain appeared in five games for the Tigers that season, going 0-3 with a 3.80 earned run average over 23.2 innings of work, all five of those appearances starts.
The previous two seasons were good for Cain, as he posted records of 12-7 and 10-9 respectively, filling a spot as one of Detroit’s main starters.
However, in what turned out to be a landmark case against Major League baseball, after Cain developed arm trouble in 1972 at the age of only 24, he insisted that manager Billy Martin still made him pitch, resulting in career-ending arm troubles (sound familiar?), which led him to sue the organization.
In a stunning move, the Michigan Bureau of Workman’s Compensation ruled in favor of Cain and judged that the Detroit Tigers would have to pay Cain $111 a week for the rest of his life!
Incredible!
I never knew this until researching Cain for this blog post.
Cain is still alive, and I’m assuming still collecting his checks from the Tigers to this day, some 47 years later.
As for his Big League career, he finished with a record of 23-19 over 68 appearances, starting 64 of those games and pitching to a 3.98 ERA over 373 innings in parts of four seasons between 1968 and 1972.

Posted by Giovanni Balistreri/ WTHBALLS at 5:35:00 AM