On the blog to close out the week is my 1978 traded card for former pitcher Rudy May, who found himself North of the border when the Baltimore Orioles traded him to the Montreal Expos on December 7th, 1977: 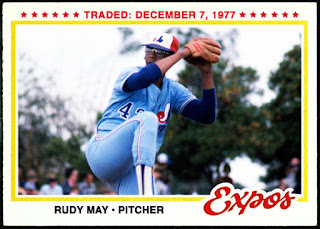 May was traded to the Expos along with Randy Miller and Bryn Smith for Joe Kerrigan, Gary Roenicke and Don Stanhouse, which seems like somewhat of an even trade looking ahead to the future.
May just came off a very nice 1977 season that saw him post a career-high 18 wins, while also tossing four shutouts over 37 starts, with 11 complete games.
He’d go a combined 18-13 over two seasons with Montreal before playing out the final four years of his 16-year career with the New York Yankees between 1980-1983, even winning the ERA title in 1980.
It would arguably be his finest year, when he led the American League in E.R.A. with a nice 2.46 mark, WHIP at 1.044 and strikeouts-to-walks with a 3.41 number.
All told, he posted a 152-159 career record, with a 3.46 earned run average, 24 shutouts, 12 saves and 1760 strikeouts.
Posted by Giovanni Balistreri/ WTHBALLS at 7:36:00 AM

Email ThisBlogThis!Share to TwitterShare to FacebookShare to Pinterest
Labels: 1978, Expos, Rudy May, Traded What If