NOT REALLY MISSING IN ACTION-LONG TIME NO SEE! 1971 LARRY BEARNARTH

Interesting custom on the blog today, a “not so missing” 1972 card for former pitcher Larry Bearnarth, who made it all the way back to Major League ball in 1971 after four years in the Minor Leagues: 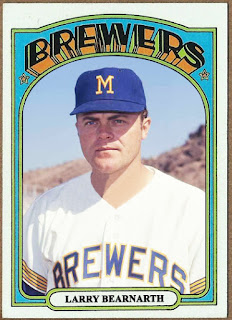 Originally up in the Majors between 1963 and 1966 with the New York Mets as a reliable middle reliever, Bearnarth toiled in the Minors between 1967 and 1970 before getting what turned out to be his last Big League action in May of 1971 with the Milwaukee Brewers.
He appeared in only two games, not factoring in a decision and posting an ERA of 18.00 with six runs allowed over three innings of work.
For his career, he finished with a record of 13-21, with an ERA of 4.13 over 173 appearances and 322.2 innings pitched, along with eight saves.
Posted by Giovanni Balistreri/ WTHBALLS at 5:35:00 AM