I can’t believe it’s already been two years since I last added to my 1976 sub-set “Founders of the Game”, so today I’ll add former player, baseball organizer and sports writer Tim Murnane to the set: 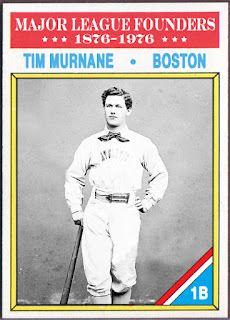 Murnane truly was a baseball pioneer, beginning as a player during the pre-professional days in the Northeast, then on to the National Association years between 1871-1875, then on to the the first few seasons of Major League ball beginning in 1876.
Though never a full-time player, Murnane was a man of many interests in the game besides actually playing, evidenced by his eventual position as President of the New England League and Eastern League Minor League systems before moving on to a more well-known career of 30 years as a sportswriter and baseball editor at the Boston Globe.
Truly a man of many talents, he’s one of the early figures of the game that need to be read up on for what they helped create, a sport that still thrives 150+ years later. Just astounding and I’m sure he’d be thrilled, maybe even a bit surprised as to what the game looks like today.
Posted by Giovanni Balistreri/ WTHBALLS at 6:53:00 AM