Next post up on the blog is a 1973 “not so missing” card for former California Angels outfielder Tom Silverio, who played the last of his Big League games during the 1972 season: 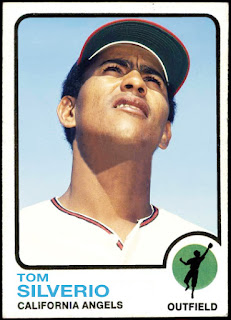 Silverio spent all three seasons of his career with the Angels, beginning in 1970 when he appeared in 15 games as a 24-year-old.
He went 0-15 at the plate, walking twice, in his first taste of the “big show”, before heading back to the Minors for the 1971 season.
But he did get a call-up and appear in three games during the 1971 season, going 1-for-3 to collect his first hit, a single.
In 1972 he’d spend most of the year in the Minors again, but he would get back up to the Majors and play in 13 games, going 2-for-12 at the plate while playing all three outfield positions.
But that would be it for the young outfielder as far as his Major League career was concerned, as he would go on to play the next nine years in the Mexican League, retiring at the age of 35 in 1981.
All told, his MLB career ended up with a career .100 batting average, with three hits over 30 at-bats, with two runs scored over parts of three seasons.
Posted by Giovanni Balistreri/ WTHBALLS at 5:55:00 AM