Another really fun card to add to my 1976 “collection”, a “not so missing edition for former outfielder-catcher Paul Powell, who played what would be the last of his Big League games during the 1975 season: 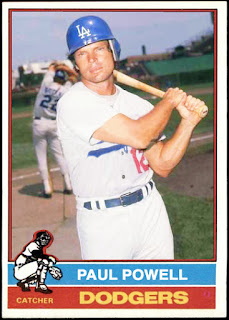 Originally up with the Minnesota Twins in 1971, Powell played exclusively in the outfield for the Twins over 20 games, hitting only .161.
After a full season in the Minors in 1972 he’d find himself out West as a Los Angeles Dodger, playing in two games during the 1973 season, going hitless in one at-bat while playing out in Left Field.
After another full season in the Minors for 1974, he’d be back on Big League grass for eight games in 1975, now also putting in time behind the plate, going 2-for-10 at the plate while catching seven games, with one other game out in the outfield.
Definitely a rarity to see an outfielder come back as a catcher like that. And fun to bring up on the blog!
For his career, Powell played in 30 games, hit .167 with seven hits in 42 at-bats, with a homer, two RBIs and nine runs scored.
Posted by Giovanni Balistreri/ WTHBALLS at 6:28:00 AM