Quick: who is the only eligible player to win four or more batting titles and NOT be in the Hall of Fame? Why it would be today’s blog subject, Bill “Mad Dog” Madlock, who gets a 1975 “In-Action” card for the long-running thread: 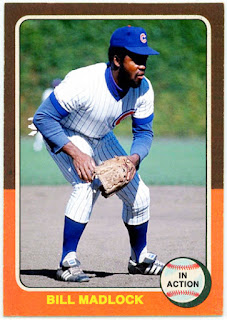 Madlock was coming off his first full season in the Big Leagues, hitting .313 for the Chicago Cubs after coming over in a trade from the Texas Rangers a year earlier.
Of course, we all know what would happen next, as Madlock would win consecutive batting crowns in 1975 and 1976, then lead the league in batting again in 1981 and 1983 while with the Pittsburgh Pirates.
The man could rake!
He would put in 15-seasons under the Big League sun, hitting .305 with 2008 hits in 6594 at-bats over 1806 games between 1973 and 1987, while getting tabbed for three All-Star games.
Is he a Hall of Famer?
I’d say he falls a bit short, but then again, if there are NO other four+ batting title holders not in the Hall, does that raise the argument for Madlock?
Posted by Giovanni Balistreri/ WTHBALLS at 5:55:00 AM