Today we have a “not so missing” 1978 card for former Cincinnati Reds pitcher Joe Henderson, who had a spot on a multi-player rookie card the previous year, his only Topps card showing: 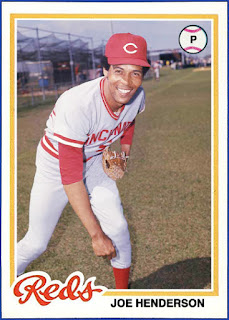 Henderson, who originally came up with the Chicago White Sox in 1974 for the first five games of his career, appeared in four games with the Reds in 1976, then seven games in 1977, accumulating a record of 3-2 over that brief Big League tenure.
Turns out that would be it for him in the Major Leagues, and it seems even professional ball altogether, at the age of 30, originally turning pro with the California (Los Angeles) Angels at the age of 18 in 1965.
He had a couple of excellent seasons in the Minors over that time, going 17-8 and 17-4 in 1968 and 1973 respectively for the Angels and White Sox organizations.
Nevertheless, he’d finish his MLB career with that 3-2 record, with an ERA of 6.69 over 35 innings and 16 appearances.
Posted by Giovanni Balistreri/ WTHBALLS at 6:04:00 AM