Here’s a “not so missing” 1973 card for a guy I already tackled, previously for a 1974 edition, former pitcher Jim Foor: 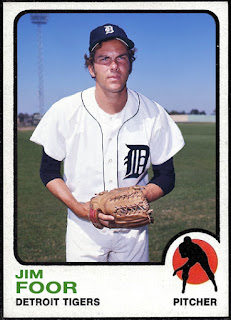 Though my first card for him was for his brief tenure with the Pittsburgh Pirates, this one has him with the team he came up with, the Detroit Tigers, for whom he collected his only Major League decision when he went 1-0 over seven appearances during the 1972 season.
To be honest those seven appearances were not pretty, as he posted a bloated 14.73 ERA over 3.2 innings of work, giving up six earned runs on six hits and six walks (ouch!).
He got his first taste of the Big Leagues the year before when he appeared in three games with the Tigers, pitching one inning in total.
In 1973 he’d find himself with the Pirates, and appear in what would be the last three games of his short career, not factoring in a decision while tossing 1.1 innings of scoreless ball.
He would spend the last three seasons of his pro career in the Minors, pitching for the Kansas City, St. Louis and Oakland organizations, before calling it a career after 1976.
Posted by Giovanni Balistreri/ WTHBALLS at 5:30:00 AM