Time to go and give Los Angeles Dodger “lifer” Bill Russell a 1975 In-Action card in the long-running series, as he was just about getting started in his 18-year career as a player before moving on to coaching and managerial positions with the organization later on: 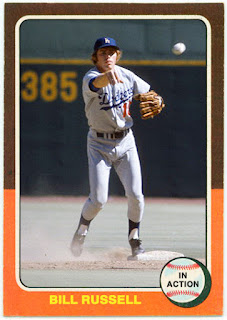 Russell came up with the Dodgers along with their other All-Star infield of Steve Garvey, Davey Lopes and Ron Cey, a rare instance that was really fun to witness as a baseball fan through the 1970’s and 1980’s.
Originally up as a 20-year-old in 1969, he’d go on to play through the 1986 season before eventually getting a chance to manage the team for parts of three seasons between 1996 and 1998.
For his playing career, Russell hit .263, with 1926 hits and 796 runs scored, with three All-Star nods over 2181 games, again, all with the Dodgers.
Posted by Giovanni Balistreri/ WTHBALLS at 6:23:00 AM