On the blog today, we have a "not so missing" 19769 card for former Chicago Cubs infielder Mike Sember, who played the last of his brief Big League career during the 1978 season: 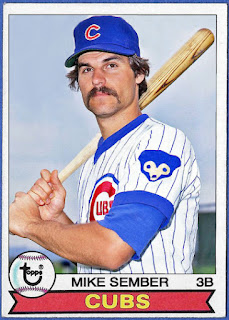 Sember appeared in nine games for the Cubs in 1978, this after making his Big League debut the season before with a scant three games as a 24-year-old.
Over those nine Major League appearances, he'd end up picking up two hits in seven at-bats, good for a .286 batting average, with two runs scored and a walk.
He’d play all of 1979 in the Minors for the Toronto Blue Jays organization, hitting only .150, which would be the last professional action he’d see in his career.
Posted by John23 at 6:26:00 AM