Up on the blog today, we have a "not so missing" 1978 card for former St. Louis Cardinal outfielder Mike Potter, who put in parts of two seasons in a brief Major League career: 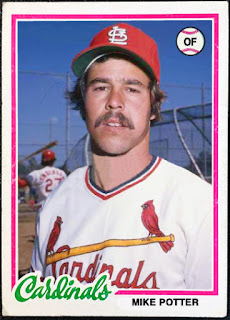 Potter appeared in only five games for St. Louis in 1977, and those turned out to be the last games of his 14 games career, going 0-7 at the plate after going 0-16 the previous season when he made his Big League debut with nine appearances.
He would spend all of 1978 and 1979 in the Minors, playing for both the St. Louis and Seattle organizations, before retiring for good shortly after that.
All told, sadly the man never picked up a Big League hit, going 0-23 with a walk in his taste of the Majors.
But hey, he made it to the Majors so can't take anything away from that!
Posted by John23 at 6:25:00 AM