Up on the blog to close out another week, an expanded 1974 league leader card for the National League's top relief pitchers of 1973: 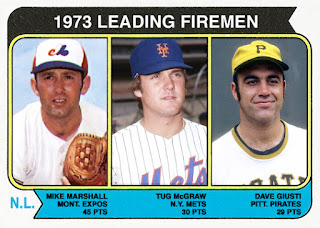 We begin of course with the Montreal Expos' reliever extraordinaire Mike Marshall who was the dominant "closer" of the era.
Marshall led the pack with his 45 "points", combining saves and wins at that time to determine the top arm to put out late-inning fires for his team.
Marshall was on his way to a dominant few seasons, with his 1974 season for the Los Angeles Dodgers the peak, as he would set the Major League record with 106 appearances, taking home the Cy Young Award and helping the Dodgers make the World Series for the first time since 1966 before losing to the three-peat Oakland A's.
Right behind him with 30 points is the New York Mets reliever Tug McGraw, who had a very nice 1973 campaign with 25 saves and five wins for the National League champs.
For McGraw, his 1973 season was actually a bit of a step DOWN from his previous two seasons where he posted ERA's of 1.70, with 19 wins and 35 saves combined.
Nevertheless, he was far from over as a Big League reliever, going on to the Philadelphia Phillies where he would close out games until 1984 and helping the team take home the championship in 1980.
One point behind McGraw with 29 points in 1973 was another long time Major League reliever, Dave Giusti of the Pittsburgh Pirates, who posted nine wins to go along with his 20 saves.
Giusti had a very nice 15 year career that saw him post 145 saves and a 100-93 record, leading the league in 1971 with 30 saves, helping the Pirates to their World Championship over the Baltimore Orioles.
The year prior, he finished fourth in the Cy Young race after he posted 26 saves while winning nine, even getting enough points in MVP voting to end up with a sixth-place showing.
Next week, we move on to the American League and their top relievers of 1973.
Posted by John23 at 6:31:00 AM