On the blog today, we have the third "missing" card created here for former infielder/outfielder Mike Adams, who put in parts of five seasons in the Big Leagues: 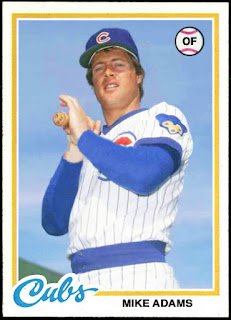 Adams appeared in only two games for the Chicago Cubs during the 1977 season, going hitless in two at-bats.
In 1978 he'd find himself a member of the Oakland A's, where he'd play in 15 games, the last of his career which began back in 1972 with three games as a Minnesota Twin.
Those 15 games with the A's would end up not only being the last of his MLB career, but his professional career as well, retiring at the age of 29, playing parts of five MLB seasons and appearing in 100 games, hitting .195 with 23 hits in 118 at-bats, with 27 runs scored and nine runs batted in.
Posted by John23 at 6:28:00 AM