I recently gave former pitcher Chuck Taylor a "do-over" for his 1974 Topps card, which originally had him airbrushed into a Montreal Expos uni after coming over from the Milwaukee Brewers.

Well today we backtrack a season and do the very same for him, as his original 1973 card had him airbrushed into a Milwaukee uniform: 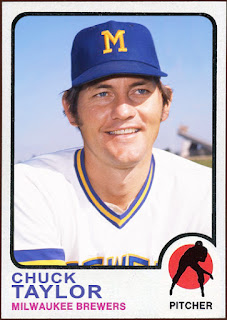 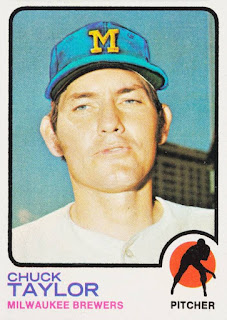 It's funny because Taylor actually finished the 1972 season with five games as a Brewer, the only games he'd appear in for the franchise before moving North of the border with the Expos.
Yet for whatever reason Topps didn't get him photographed with his new team before the production of the 1973 cards (??).
Nevertheless, here you go, with a nice shot of him as a Milwaukee Brewer that, believe it or not, TOPPS took!
Taylor went over to Montreal after a split season in 1972 when he suited up for both the New York Mets and Milwaukee.
In his first year with the Expos, he appeared in eight games, going 2-0 with a very nice 1.77 earned run average over 20.1 innings of work out of the bullpen.
He had a decent run as a reliever the last three years of his career after coming up with the St. Louis Cardinals in 1969 as a starter.
He would end up at 28-20 with an impressive 3.07 ERA over 607 innings and 305 appearances, all but 21 in relief.
Posted by John23 at 6:03:00 AM