On the blog today, we move ahead with my on-going "missing" 1972 All-Star sub-set, with starting outfielder Carl Yastrzemski of the Boston Red Sox: 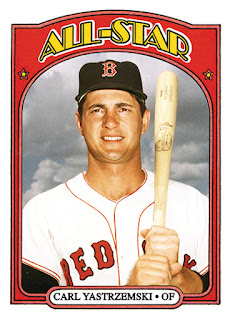 "Yaz" made his eighth All-Star team in eleven seasons as a Major League superstar, already the possessor of an MVP Award and five Gold Gloves since bursting onto the Big League scene in 1961.
All he'd do is go on to make another ten All-Star teams before he was through after the 1983 season, along with two more Gold Gloves, eventually taking up his rightful spot in Cooperstown in 1989 on his first year of eligibility.
As someone who grew up in New York City during the second half of his career, it's really easy to forget that Yastrzemski was a Long Island, New York boy before he went on to become a New England legend.
And how could he NOT become a legend, what with 23 years of Major League ball, all with the Red Sox, turning in three batting titles, a Triple Crown in 1967 along with an MVP Award, seven Gold Gloves, 18 all-star nods, and 25 league-leads in primary offensive categories.
By the time he did the retirement tour in 1983, he scored 1816 runs, collected 3419 hits, 646 doubles, 452 homers, 1844 runs batted in along with a .285 batting average.
He was just plain awesome…
Posted by John23 at 6:31:00 AM