On the blog today, we have a "not so missing" 1979 card for two-year Major League pitcher Willie Mueller of the Milwaukee Brewers: 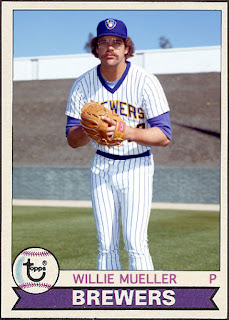 Mueller made his MLB debut during the 1978 season, appearing in five games and posting a record of 1-0 with an earned run average of 6.39 in 12.2 innings of work.
He would spend the next two seasons in the Minors before getting another chance at the Big League level with one solitary game in 1981, throwing two innings and allowing one run, for a 4.50 ERA, not factoring in a decision.
He'd find himself in the Montreal Expos Minor League system in 1982 before coming back to the Milwaukee system in 1983, but never getting another shot at Major League ball, retiring after that season.
All told, Mueller finished with six appearances and a 1-0 record, with an ERA of 6.14 over 14.2 innings pitched.