On the blog to start off a new week, we have a "missing" 1976 traded card for former outfielder Willie Crawford, who found himself heading East from Los Angeles to the St. Louis Cardinals: 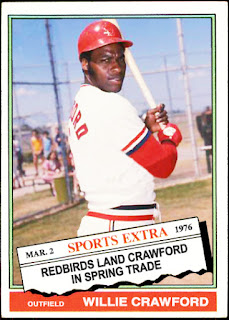 Crawford spent the first 12 years of his Big League career with the Dodgers before heading to the Cardinals in a deal for Ted Sizemore on March 2nd, 1976.
He would play well in what turned out to be his only year there, hitting .304 over 120 games and 392 at-bats, driving in 50 runs while scoring 49.
But his time there was brief, for on October 20th of 1976 he was traded to the Giants as part of a six-player trade that included John Curtis and Vic Harris going to San Fran, while Mike Caldwell, John D’Acquisto and Dave Rader came to St. Louis.
As if that wasn't enough change of scenery, on March 26th of 1977, just before the season started, Crawford was on the move again, getting traded to the Houston Astros.
But it didn't end there! After just 42 games with Houston, Crawford found himself playing for the Oakland A’s after getting traded for Denny Walling and cash.
Turns out that time with Oakland playing out the 1977 season would be the last of his Big League career, as he would go on to play in the Mexican league over the next two years before retiring for good as an active player.
Over 14 MLB seasons, Crawford hit .268 with 921 hits over 3435 at-bats, playing in 1210 games between 1964 and 1977.
Posted by John23 at 5:29:00 AM