Next up in my on-going "On Card All-Star" thread where I slap a big beautiful All-Star banner on a player's base card instead of the dreaded separate All-Star card Topps created in none other than the greatest backstop there ever was, Johnny Bench of the Cincinnati Reds: 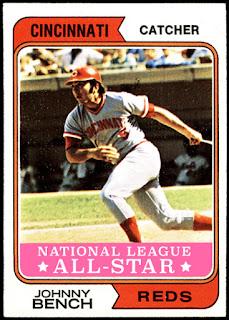 Bench was coming off his sixth straight All-Star nod in six full seasons in the Big Leagues, as well as taking home his sixth straight Gold Glove.
Bench already had two MVP’s under his belt by the time this card would have hit the market, and was just about to become a two-time world champion with two straight World Series wins in 1975 and 1976 against the Boston Red Sox and New York Yankees respectively.
He would put together a career rarely seen by ANY player, let alone a catcher: 14 all-star games, 10 Gold Gloves, two home run titles and three RBI titles, all while donning the “tools of ignorance” for 17 seasons, all with the Reds.
Posted by John23 at 5:43:00 AM