Up on the blog today we have a career-capping 1973 card for former catcher Frank Fernandez, who finished up a six year Major League career with three games for the Chicago Cubs in 1972: 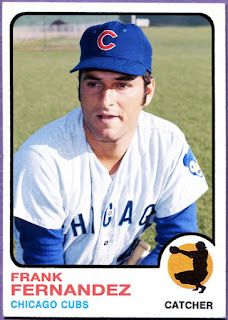 Fernandez went 0-3 at the plate in that limited play, striking out twice while getting some time behind the plate.
The year before, Fernandez began the season with the Oakland A's after coming over to them from the Yankees in the Al Downing-Danny Cater deal a year earlier, before being dealt to the Washington Senators after only two games out West.
Turns out Oakland would come along and purchase his contract about a month and a half later, but again, he’d only play two games for them before getting traded to the Cubs for Adrian Garrett two months later.
All told, Fernandez played in 39 games in 1971, batting a cool .138 with 11 hits over 80 at-bats in those four stints.
For his career, he played in 285 games, mainly for the team that drafted him, the New York Yankees, batting .199 with 145 hits over 727 at-bats, hitting 39 homers with 116 runs batted in, which is not that bad considering the at-bats to home runs.
Posted by John23 at 5:33:00 AM