OK now! Today we move on to 1974 with my on-going "expanded league leaders" thread, creating league leader cards for EACH league celebrating the top 3 in a category instead of the combined top players of both leagues on one card.

With that we begin with the National league and the top 3 batters of 1973: 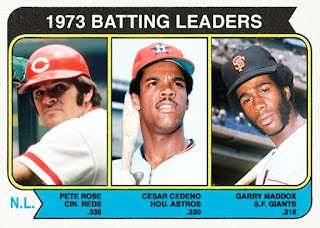 We start off with the great Pete Rose, who took home the third (and final) batting title of his career in 1973 when he hit .338, a healthy 18 points ahead of the second place batter.
During that season he collected a career-best 230 hits, while scoring 115 runs with 64 runs batted in for the Cincinnati Reds.
Behind him with a very nice .320 batting average is Houston Astros young stud Cesar Cedeno, who matched the same batting average from 1972.
As a matter of fact his 1973 season was almost the mirror-image of his 1972 performance, with him collecting 168 hits and 35 doubles, with 25 homers and 70 RBIs, with 56 stolen bases thrown in for good measure.
Those numbers are almost exactly the same as his 1972 numbers, and indeed that is a very good thing! The man was a budding superstar back then.
Just one point off of Cedeno in 1973 was a little bit of a surprise, none other than Garry Maddox, the "Secretary of Defense", who had a very nice first truly full season in the Big Leagues with his .319 batting average along with 187 hits, 30 doubles, 10 triples and 11 homers, with 76 RBIs and 81 runs scored.
Just two years later he'd find himself East as a member of the Philadelphia Phillies, where he'd take home eight Gold Gloves for his stellar defensive play, and be part of some solid teams with others like Greg Luzinski, Mike Schmidt, Steve Carlton and Larry Bowa.
Well there you have it! The top-three batters of the National League in 1973.
Next week, the American League!
Posted by John23 at 6:51:00 AM