On the blog today, we have a 1974 "not so missing" card for former Chicago White Sox pitcher Denny O'Toole, who put in parts of five seasons in the Big Leagues, yet never picked up a decision: 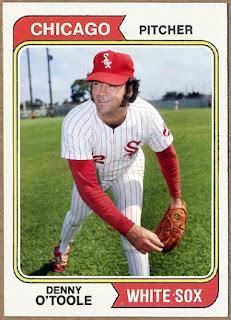 O'Toole played the last of his 15 Major League games in 1973, appearing in six games and pitching 16 innings.
As per what turned out to be the usual in his career, he didn't pick up a win or a loss, pitching to a 5.63 earned run average with eight strikeouts and three walks.
Originally up in 1969, O'Toole would go on to appear in the aforementioned 15 total games over his career, appearing in at least one game for Chicago between 1969 and 1973.
Over those games he finished with a career ERA of 5.04, with 30.1 innings pitched, striking out 22 and walking 10, all out of the bullpen.