Time to go and add former All-Star catcher Ray Fosse, aka "The Marion Mule" to my long-running "Nicknames of the 1970's" thread started so many years ago: 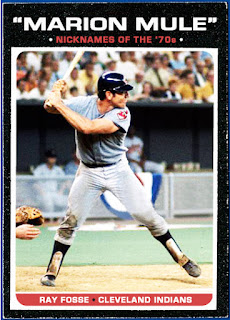 The catcher, forever remembered for being on the wrong end of a Pete Rose collision at home plate in the 1970 All-Star game, had a nice run between 1970 and 1973 when he put up very nice numbers for a catcher in the era.
In 1970 he hit 18 homers while batting .307, with 61 runs batted in and 62 runs scored, along with the first of his two Gold Gloves.
Contrary to what many believe, the All-Star injury at the hands of Pete Rose did not derail his career, as other injuries along the way in the following years also contributed to his drop in performance.
Nevertheless, by the time Fosse retired after a brief stint with the Milwaukee Brewers in 1979, he finished with a .256 average, with 758 hits over 2957 at-bats, driving in 324 runs while scoring 299 himself over 924 Big League games.
On another note, you really have to wonder how good those Cleveland Indians could have been by the late-70’s had they NOT traded away players like Graig Nettles, Dick Tidrow, Chris Chambliss and Fosse.
Posted by John23 at 5:59:00 AM