A RE-DO OF ONE OF MY OWN: MISSING IN ACTION/CAREER-CAPPER 1976 DAVE McNALLY

I am SO happy with a new previously unseen image of Dave McNally suited up as a Montreal Expo! So much so that I am today giving myself a "do-over" of one of my early "missing in action" cards and posting it up here: 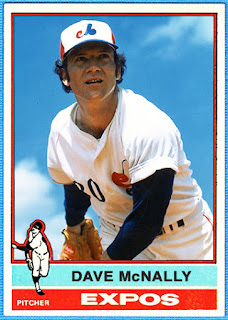 Man, I have been searching for a better image of McNally at his last Big League stop for so long I almost gave up hope (kind of like I did with Sam McDowell as a Pittsburgh Pirate!).
But out of nowhere I stumble across this image, and to top it off it is high resolution enough to even be printed for one of my future "packs", so keep an eye out for that for you card purchasers out there!
Here's my original post writing from way back on May 27th, 2014:
For the 1975 season, McNally started 12 games for the Expos, and posted a 3-6 record with a 5.24 E.R.A and 33 strikeouts in 77.1 innings pitched.
However it was how he ended up playing in 1975 that made history.
Never intending to play beyond 1974, McNally actually retired before being convinced by Player's Union Executive Director Marvin Miller to add his name to the grievance the Player's Union filed contesting the age-old "Reserve Clause" along with star pitcher Messersmith.
As explained online under the "Seitz Decision" (named for the ruling arbitrator Peter Seitz):

"In 1975, Messersmith of the Los Angeles Dodgers and McNally of the Montreal Expos had had their 1974 contracts renewed by their teams on the basis of this reserve clause. Since neither signed a contract during that option year, both insisted that they were free to sign with other teams the following season. The owners disagreed, arguing that under the reserve clause the one-year contracts were perpetually renewed.
The two players submitted the grievance to arbitration, and Seitz later issued his ruling that Messersmith and McNally were free to bargain with other teams because organized baseball could only maintain a player's services for one year after expiration of the previous contract."

This was HUGE, as it led to what we all know today as Free Agency.
For McNally, he ended up retiring at the young age of 32, leaving behind quite a resume: four 20-game winning seasons, two World Championships, a 184-119 career record, and a title-winning shutout in the 1966 World Series where the Orioles upset the favored Dodgers, sweeping them 4 games to none.
McNally threw a four-hit shutout against losing pitcher Don Drysdale to go along with shutouts thrown by teammates Wally Bunker and Jim Palmer.
He's also the only pitcher to hit a grand slam in the World Series, doing so in Game 3 of the '70 series against the Reds, and only one of two pitchers (Roger Clemens the other) of winning 12 straight decisions three times in his career, including 17 straight over the 1968 and 1969 seasons.
On top of all of that, he also came into the big leagues with a bang, tossing a 2-hit shutout against the Kansas City Athletics on September 26th, 1962 at the ripe old age of 19! Nice…
So call this a "career capper", or a "missing in action" card, but let's close the books on McNally and his solid career with one last card.
Posted by John23 at 5:39:00 AM