On the blog today, a fun one to add, a 1975 "not so missing" card for Pittsburgh Pirates reliever Kent Tekulve, who made his MLB debut with eight games in 1974: 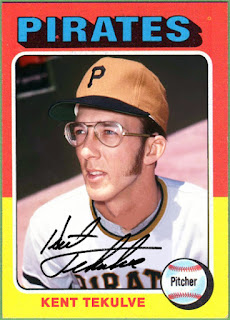 Tekulve, who I absolutely loved as a kid during his playing career, posted a record of 1-1 over those eight games, with an earned run average at 6.00 over nine innings as a 27-year-old.
I never realized he made his Big League debut so late!
Tekulve really is an under-appreciated reliever in the games history, posting three seasons of 90+ appearances, the last which came at the age of 40 while with the Philadelphia Phillies!
Of course his best years were with Pittsburgh, twice finishing top-5 in the Cy Young race, saving 30+ games twice and 20+ four times.
He really put together an excellent 16-year career coming out of the 'pen, ending with a 94-90 record with 184 saves in 1050 games over 16-years with the Pirates, Phillies and Reds, all in relief (which I believe is still a Major League record for games without a single start in a career).
Just a great arm to depend on coming out of the bullpen.
Posted by John23 at 6:31:00 AM