Moving along on my new “Expanded League Leaders” thread, we now hit the American League’s top home run hitters for 1972, shown here on my redone 1973 card: 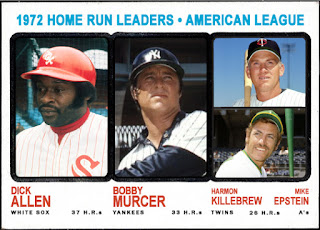 Turns out there was a bit of a twist for this one, as there was a tie for third place, so it was a “squeeze” to get them in there along with the top two thumpers.

Leading the pack of course was the A.L. MVP Dick Allen of the Chicago White Sox, who had himself some season, almost winning the Triple Crown, led by his 37 homers while also pacing the league with 113 RBIs, and falling 10 points off the batting title to Rod Carew’s .318 average.

Behind Allen in the Home Run race was none other than New York Yankees All-Star outfielder Bobby Murcer, who smacked 33 homers that season in the middle of a great run during the Yankees “dark years”, allowing people to forget just how good Murcer was for a period of time.
In third place, as I mentioned earlier, was a tie between Hall of Famer Harmon Killebrew and (surprise) the Oakland A’s Mike Epstein, who each hit 26 homers in 1972.

Of all the Oakland A’s hitters, like Reggie Jackson, Sal Bando, Joe Rudi and Gene Tenace, who would have thought it was Epstein that would place third in the league’s home run race?

This is the main reason I love creating these expanded league leader cards, as we all remember the first place finishers, but some of these second and third place guys seem out of nowhere!