Up on the blog today, we have the FIFTH "not so missing" card creation for the blog over the years for former infielder/outfielder Doug Howard, who got NO love from Topps during his five year Major League career, this one a 1973 edition: 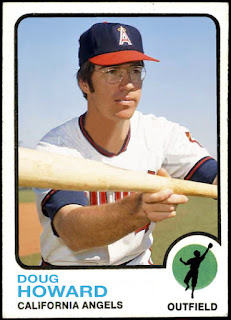 I believe the only card ever created for him was an OPC 1977 Toronto Blue Jays card, for whom Howard never ended up playing for, finishing his career in 1976 with 39 games as a Cleveland Indian.
Howard made his MLB debut in 1972, appearing in 11 games with the California Angels, hitting a respectable .263 with 10 hits in 38 at-bats.
He went on to go 2-21 at the plate in 1973, which translates to an .095 average along with a run batted in and walk for the Angels, which sadly for him was a "typical" year for him over his Big League tenure.
He’d play parts of five seasons in the Majors, also playing for the St. Louis Cardinals and Cleveland Indians.
All told he ended up playing in 97 games, batting .212 with 46 hits in 217 at-bats over 97 games, with five doubles, a triple and a home run.
Posted by John23 at 6:29:00 AM