Today's blog post is a fun one for me to add, a "not so missing" 1970 card for Ron Blomberg, who eventually became the very first batter to ever hit as a "designated hitter" a few years later while with the New York Yankees: 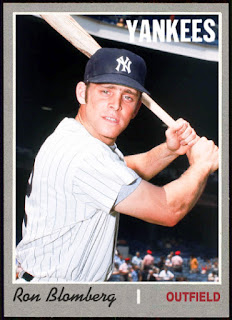 Blomberg made his Major League debut in 1969 with four games, hitting .500 going 3-for-6 at the plate with a walk thrown in.
After a full season of Minor League ball in 1970, he was back in the Big Leagues for good in 1971, appearing in 64 games for the Yankees, hitting an impressive .322 with 64 hits in 199 at-bats, with 30 runs scored and 31 RBIs.
In doing some quick research for this post, though I was familiar with the man, the #1 overall pick in the 1967 draft by the Yankees, I never realized what kind of athletic stud he was coming out of High School!
Playing out of Druid Hills High School, Blomberg went on to become the only athlete ever chosen for the Parade All-American teams in football, baseball and basketball.
He also reportedly received about 125 scholarships for basketball, and over 100 football scholarships, instead signing with the Yankees for what amounts to $500,000 in today’s money ($75,000 in 1967).
Sadly repeated injuries curtailed his Big League career, going through four knee and two shoulder injuries over time, resulting him to never play a full-season and retiring by the age of 30 after only one season with the Chicago White Sox after signing as a Free Agent.
Nevertheless, the did retire with a very nice .293 career average, serving mainly as a DH with some time at first base as well as in the corner outfield positions.
All told, he spent parts of eight years in the Majors, playing 100 or more games only twice with 107 and 100 games in 1972 and 1973 respectively.
Posted by John23 at 5:33:00 AM