On the blog today, the next 1977 slugger who reached the "30 Home Run Club" for that season, none other than "should be" Hall of Famer (in my eyes) Steve Garvey of the Los Angeles Dodgers: 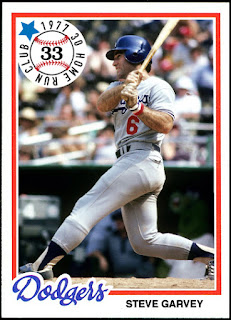 Garvey hit 33 home runs for the National League champs, the only time he reached 30+ for a season in his career actually.
Turns out it was perfect timing as he joined fellow teammates Dusty Baker, Ron Cey and Reggie Smith to become the first team in Major League history to have four such home run hitters in a season.
Garvey was humming through the mid-70's, driving in over 100 runs five times, collecting 200 or more hits six times, and taking home five Gold Gloves.
I’ve said it once, I’ve said it a few hundred times: the fact that this man is NOT in the Hall of Fame, representing his era of Major League baseball, is a joke. Flat out nonsense. Beyond the numbers, the personality, the leader of a team that was shattering attendance records, helping popularize the game further, the man was an All-Star year in-year out.
In my book, seeing that the most support he ever received was 42.6%, which was in his second-year of eligibility in 1994, is nothing short of a black mark on what the Hall of Fame is.
Posted by John23 at 6:06:00 AM