Up on the blog today, we have a "not so missing" 1978 card for former Baltimore Orioles outfielder Mike Dimmel, who played parts of three seasons in the Big Leagues, totaling 39 games between 1977 and 1979: 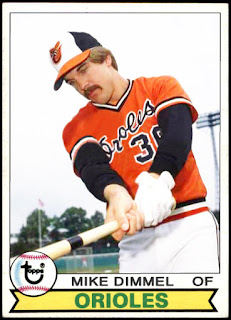 Dimmel appeared in eight games for Baltimore during the 1978 season after making his Big League debut in 1977 with 25 appearances.
In the eight games of 1978 he never got an at-bat, either used as a pinch runner or out in the outfield, though he did score two runs while getting caught stealing once.
In his rookie year of 1977 he came to bat five times, but never collected a hit, scoring eight runs while stealing a base, putting time out in center and right field.
Come 1979, Dimmel found himself with the St. Louis Cardinals, where he played what ended up being the last games of his MLB career, six to be exact, going 1-for-3 at the plate with a run scored and a caught stealing.
He would go on to put a full season in the Cardinal Minor League system in 1981, but never get another Big League shot again, retiring after the season.
All told, Dimmel played in 39 games, hitting .125 with one hit over eight at-bats, with 11 runs scored and a stolen base.