A short while ago a few of you asked or requested that I tackle the fact that over some years during the 1970's Topps created a simpler league leader card that featured two players, each leagues leader in a particular hitting or pitching category instead of expanded cards with the top three or so in each league, like the 1976 sub-set or 1972.

Well today we have the beginning of what will be a long thread creating just that, beginning with 1973, the first such year during the decade that went to the two-player format.
We'll start with the National League and it's top-3 hitters of 1972: 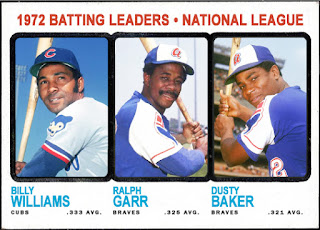 Betcha didn't have Dusty Baker in third that year huh?
Of course Billy Williams took home the batting crown that year, putting in another amazing year for the Chicago Cubs, yet sadly once again during another even BETTER year from some catcher on the Cincinnati Reds, Johnny Bench.
Ralph Garr, the runner-up in the NL batting race, of course would go on to top the league in 1974, so he'd eventually know the feeling of batting champ soon enough.
For Baker, it turned out it was his career-best with a .321 batting average, though he would hit .320 in 1981.
The 1972 season was actually his first full year as a Major Leaguer, and he did not disappoint!
That is why I do love the expanded league leader cards so much, since there were a great many players who ended up just short of glory that would surprise you.

We'll do this by category so the next card in the thread will be the American League batting leaders, with another player who may surprise some of you.