Though I am actually a fan of the CLASSIC 1977 Topps airbrush job on Manny Sanguillen's card, I am finally creating a do-over, using the catcher actually suited up in Oakland's finest, so here you go: 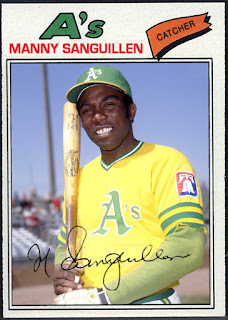 Now, for those that really need a refresher on the original, here you go: 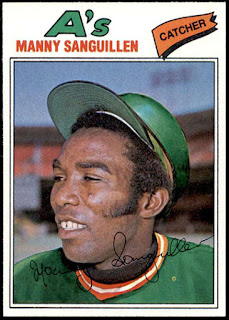 Absolutely stunning isn't it? Topps really went to town on this one!
Nevertheless, I had this great image of Sanguillen from the 1976 season and figured it was time to recreate the card for the blog.
Sanguillen really gets overlooked when it comes to how well he played during his 13-year career, all but 1977 spent with the Pittsburgh Pirates.
This was a catcher who hit over .300 four times, with a high of .328 in 1975, while also topping .280 another four times, before retiring with a robust .296 career average.
I personally think he may have been ripped off a Rookie of the Year in 1969 when he hit .303 with 62 runs scored and 57 runs batted in as a rookie catcher, losing to the Dodgers Ted Sizemore (a STRONG argument can also be made for Sanguillen's teammate Al Oliver, who also could have won).
He was named to three all-star teams, and even garnered some MVP support in 1970, 1971, 1972 and 1975 as a member of the Bucs.
A very nice career for a solid catcher during the 1970's who gets forgotten among the Benchs, Fisks, Munsons and Simmons of the Majors…