On the blog today, we have an addition to one of my favorite series I've created for the blog, my 1971 "Minor League Days" set, with the great and vastly under-rated Bill Freehan added: 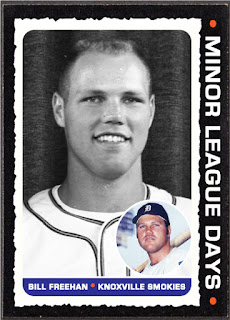 Freehan was a 19-year-old stud just starting out with the Detroit system in 1961 when this photo was taken, as he would hit .310 over 77 games with 11 homers and 55 runs batted in for the Knoxville Smokies.

He'd get his first taste of the Majors at the end of the season, appearing in four games, then spending all of 1962 in the Minors perfecting his carft, before coming back to the "Big Show" in 1963, where he'd stay for good.
Really, Freehan does NOT get enough credit for being the best backstop in the A.L. during the 1960's into the 1970's before guys like Carlton Fisk and Thurman Munson came along.
The man was an eleven-time All-Star, five-time Gold Glover and received MVP consideration six times, finishing third and second respectively in 1967 and 1968.
A solid player through and through, he'd retire after the 1976 season with a .262 lifetime average, 200 homers and 758 runs batted in over 1774 games and 6073 at-bats and finished with a .993 fielding percentage while donning the "tools of ignorance."
This man belongs in the Hall of Fame!
Posted by John23 at 6:22:00 AM