Up on the blog today we have a "not so missing" 1979 card for former Philadelphia Phillies reliever Kevin Saucier, who made his MLB debut in 1978 with one single appearance: 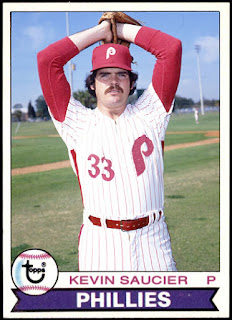 Saucier took the loss in his first Big League game, giving up four runs in two innings of relief work, while striking out two.
He would go on to pitch another two years for the Phillies, including their World Champion 1980 campaign where he posted his second finest season as a Major Leaguer, going 7-3 over 40 games, with a 3.42 ERA over 50 innings.
The following year, now with the Detroit Tigers, he put in his best year, going 4-2 over 38 appearances with a brilliant 1.65 earned run average, saving 13 games and working 49 innings.
He was back in 1982 and had another solid season, going 3-1 over 31 appearances with five saves, pitching to a 3.12 ERA over 40.1 innings, but began suffering a "tired arm" as he called it, leading to being placed on the disabled list.
While trying to work his way back in Minor League ball, he suddenly could not find the plate, walking 23 batters in 22 innings.
Concerned that he "didn't know where the ball was going to go", he retired from baseball, still only 25 years of age.
I do remember way back when the coverage of his struggles trying to find the plate, something that seemingly came out of nowhere for such a promising young pitcher.
Always stuck with me.