JUST FOR FUN-TIME FOR ANOTHER 1974 HANK AARON REDO

My apologies, but I will always create Hank Aaron cards, even if I already created one for a particular year, as with today's card, yet another 1974 redo, this time as a portrait layout adding to my previous landscape orientation: 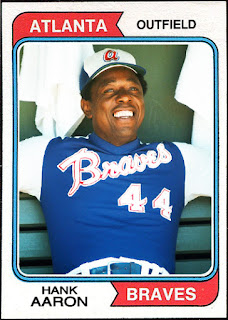 Just a great picture of the legend smiling, enjoying life, on his way to baseball history.
Just a few months back I posted my landscape 1974 card, and it was accompanied by the following post:
Of course all baseball talk was about Aaron at this time, with his overtaking Babe Ruth as the all-time Home Run champion as the 1974 season opened up, and rightly so!
The man was simply out of this world...
Let his numbers do all the talking: 2174 runs scored, 3771 hits, 624 doubles, 98 triples, 755 home runs, 2297 runs batted in, a .305 batting average no less than 21 all-star selections!
Just tremendous!
He also had eight top-5 finishes for MVP, including taking home the award in 1957, as well as three Gold Gloves won consecutively between 1958-1960.
It's incredible to look at his 15 years of topping 100 or more runs scored, 11 seasons of 100 or more runs batted in, five more seasons of 90+ RBI's, and TWENTY STRAIGHT years of 20 or more home runs.

Rest in Peace to one of the absolute greats of the game, Mr. Henry Aaron...aka "Hammerin' Hank"!