Continuing on this thread regarding the 1972 "awards" sub-set, today we take a look at card #623, the "Cy Young Award" card featuring the Cy Young plaque. 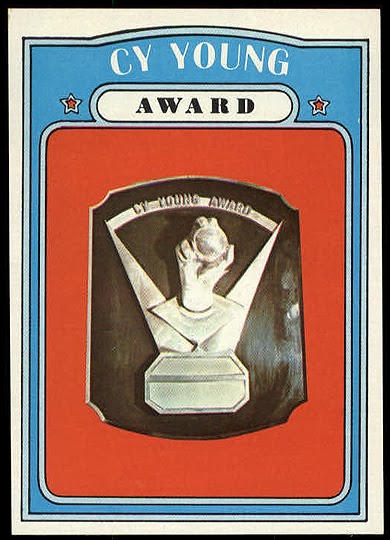 Beautiful huh? (yawn…)
So today I offer up my redesign of the card, this time featuring the two recipients from 1971: Vida Blue in the American League and Fergie Jenkins in the National League.
Take a look: 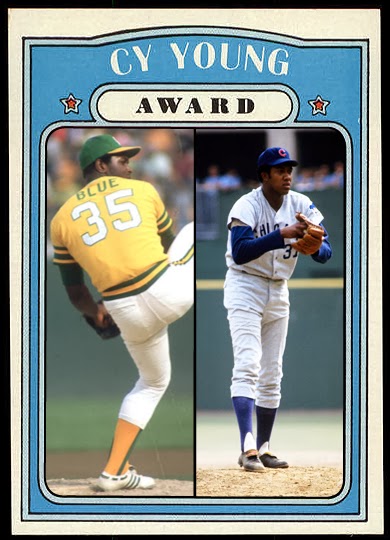 Again, just a nicer card with the actual players featured instead of the "hardware". Hope you all agree…
As I mentioned in my post of the "M.V.P." card earlier on this blog, Vida Blue burst on to the Major League scene in 1971 with an amazing 24-8 record along with a 1.87 earned run average and 301 strikeouts.
For that he took home both the M.V.P. And Cy Young awards at the ripe old age of 21.
On the National League side, Fergie Jenkins got his award after finishing third the previous year (and would finish third the FOLLOWING year).
To win the award he fashioned a 24-13 record with a 2.77 E.R.A. along with 263 strikeouts. On top of that Jenkins was absolutely in control on the mound, issuing only 37 walks in 325 innings of work!
Easily the most overlooked "big winner" among Hall of Fame pitchers from the era, Jenkins would end up with 284 career wins to go along with 3192 strikeouts and a 3.34 E.R.A.
He would also be the first pitcher to amass over 3000 strikeouts while issuing under 1000 walks, finishing just under the wire with 997 career base on balls. He'd be joined later on by Greg Maddux, Pedro Martinez and Curt Schilling.
Next up on this thread: card #624: "Minor League Player of the Year"- Bobby Grich.
Keep an eye out for it…
Posted by John23 at 8:40:00 AM