Back in the early 1990's I picked up the latest SABR Journal and it had a great article that wondered who would have won the Cy Young Award, had there been one, between 1901 and 1955, and who would have also won the award had they given it out in both leagues between 1956 and 1966.
I LOVE stuff like that, as I was also always imagining what the outcome would have been if "this or that" had come to pass.
Well, I recently got the idea to create a "Cy Young Award Winners" series based on the awesome 1975 "Most Valuable Players" sub-set, highlighting who the winners were, or WOULD have been, between 1951 and 1974.
For the "winning" pitchers prior to 1956, as well as the OTHER league winner for those "single-winner" years (56-66), I went with who the SABR people felt would have won as covered in that previously mentioned article.
Heck, if it was good enough for SABR, it's always good enough for me!
Now I'm sure there will be a pick or two that you don't agree with (there were some I wasn't totally convinced of myself). But it IS fun to start the discussion with the SABR picks!
Today we'll start with 1951, as I created a card that showcases who SABR assumed would have won the award: Sal Maglie in the National league and Ed Lopat in the American League.
Take a look at my card design:

Both Maglie and Lopat didn't have a Topps card that year, so I created one for each player (as Topps did for Roy Campanella and Maury Wills for their M.V.P. set). So in essence, I have imagined cards for an imagined card.
Here's a closer look at the "created" cards for this post: 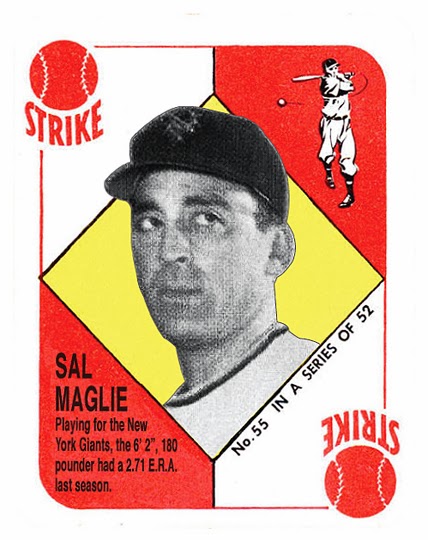 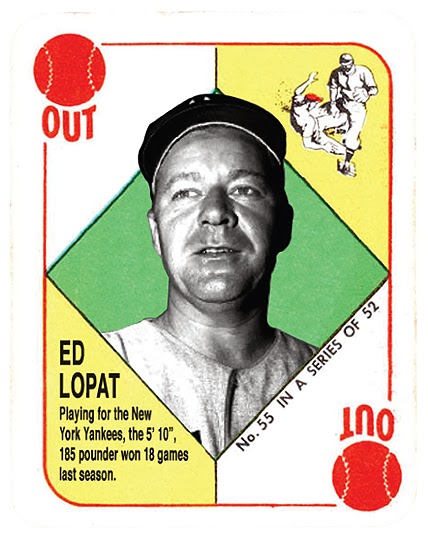 Maglie had a brilliant 1951 campaign, as he lead the Giants in that dramatic pennant winning season with a 23-6 record along with a 2.93 E.R.A.
He pitched in 42 games, of which 37 were starts, and he not only threw three shutouts that year, but threw in four saves as well. Not bad for a guy pitching in only his second full season in the big leagues, at the ripe "old" age of 34!
As it was, Maglie finished fourth in Most Valuable Player voting that year. But it seems he would have been a good pick to win a Cy Young Award in the National league if there was one that year.
For the American league, SABR felt that Ed Lopat of the Yankees would have own the award, based on his 21-9 record and 2.91 E.R.A.
Lopat appeared in 31 games that championship-winning season in the Bronx, and pitched four shutouts with 20 complete games.
There were some other big game winners that year for the A.L. (Bob Feller, Ned Garver, Vic Raschi), but oddly enough they all had high earned run averages that off-set their other accomplishments, and I think that's why SABR went with Lopat.
I think I personally would have gone for Bob Feller instead, or maybe Raschi, but hey, like I said earlier, if SABR makes a pick I can easily go with it too and sleep well at night.
Next up: the 1952 "winners", one who you already know since he took home the American League M.V.P. that season, Bobby Shantz.