Today’s blog post has a 1971 custom celebrating the April 7th, 1970 debut of a new Major League franchise, the Milwaukee Brewers, who were brought East after one season as the Seattle Pilots the year prior: 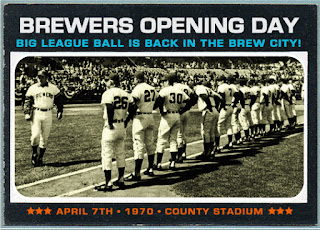 Falling to the California Angels 12-0 on Opening Day in 1970, the Brewers began their franchise run as an American League West team before sliding into the East in 1972 to make room for the Texas Rangers.
Pretty much the Seattle team from 1969, their stars in their inaugural campaign were double-threat Tommy Harper, who would go on to have a 30-30 year with 31 homers and 38 stolen bases, Centerfielder Dave May, and reliever Ken Sanders.
A guy by the name of Bud Selig, the future joke of a Major League Commissioner, was their owner, who acquired the team in bankruptcy court, and would own the team in one form or another through 2004.
By the end of the 1970’s they were putting together loaded teams that would eventually make the World Series in 1982, falling to the St. Louis Cardinals, boasting line-ups with guys like Robin Yount, Paul Molitor, Ted Simmons, Cecil Cooper and Gorman Thomas.
In 1998, the organization was moved to the National League (which still irks me), where they have been ever since, making the N.L. Championship Series in 2011 and 2018, losing both times.
Posted by Giovanni Balistreri/ WTHBALLS at 6:24:00 AM

Email ThisBlogThis!Share to TwitterShare to FacebookShare to Pinterest
Labels: 1971, Brewers, Highlights of the 70's